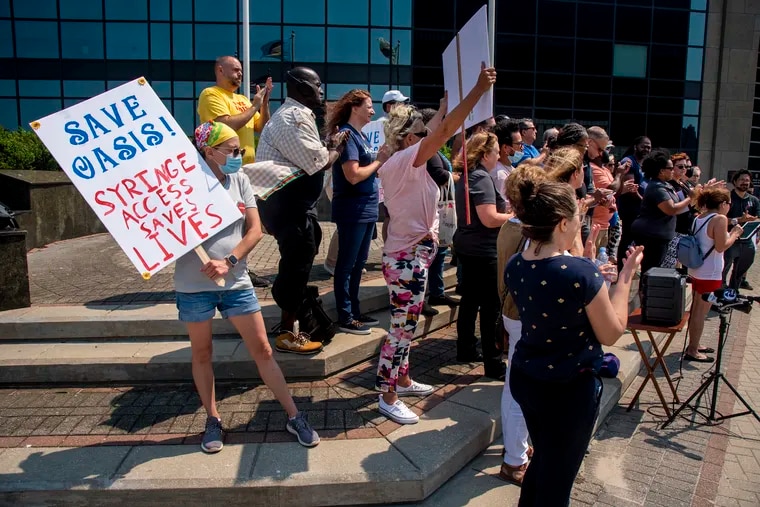 As activists rally in Harrisburg to legalize needle exchanges, a fight to keep them open continues in New Jersey

This week, advocates from across Pennsylvania are set to rally in Harrisburg to support the legalization of needle service programs in the Commonwealth, where the public health measure is still against the law – although some communities allow them to serve people with addictions.

Meanwhile, in New Jersey, where needle services have been legal since 2006, harm reduction advocates are fighting to keep the state’s oldest needle exchange program open in Atlantic City.

The two advocacy campaigns show how controversial needle exchanges remain, despite decades of evidence showing they reduce the spread of infections like HIV and connect addicts to the medical care and treatment they desperately need. And the push for better access to syringes in the region is unfolding amid a record rise in overdose deaths.

Needle service programs operate in more than 40 states, including Pennsylvania, although it is one of the few whose laws explicitly prohibit needle distribution. In the midst of the AIDS epidemic in the 1990s, activists in Philadelphia defied the law and opened the needle-exchange program that became Prevention Point, which has since operated under the permission of the city government. Pittsburgh’s needle exchange, also called Prevention Point, operates with similar leeway from its local government.

Several other needle exchanges are operating with varying degrees of visibility across the state. But in many places, the state ban keeps outreach workers in constant fear of arrest.

“[In the rural areas], these are smaller nonprofits, jumping in cars with syringes, fentanyl test strips and naloxone. They’re out in the woods, in hiking boots, in the mountains, doing really focused, targeted outreach to people who have essentially isolated themselves,” said Carla Sofronski, co-founder of the Pennsylvania Harm Reduction Alliance, one of the organizers. of the rally. “They do amazing harm reduction work to keep people alive and safe. But they do so in fear of being imprisoned at any moment. »

In Philadelphia Pass counties, people can drive to town for clean needles, but statewide legalization would remove that barrier, advocates say.

Bucks County’s Susan Ousterman said her son Tyler Cordeiro contracted endocarditis last year – a life-threatening inflammation of the lining of the heart – because he couldn’t get clean syringes. “He contracted it in May [2020], and he stayed in the hospital for three months,” she said. “It was bad. His kidneys were failing and he almost died.

In August 2020, she said, her son was jailed for a probation violation in Bucks County after he was caught carrying a syringe. His medical benefits were suspended while he was in prison, and afterwards Cordeiro and his family struggled to find treatment – a task made more difficult by the fact that he had a medical marijuana card. (At the time, a Spotlight PA investigation found that confusion over federal regulations meant that some county drug and alcohol offices in Pennsylvania were not using federal funds to pay for drug treatment of medical marijuana cardholders.)

Cordeiro died of an overdose in October 2020.

“He lost his medical coverage, he couldn’t get funding for treatment – ​​you can’t identify a single thing that was a failure. But certainly, access to clean syringes could have improved his outcome,” Ousterman said.

Four Pennsylvania lawmakers, including Philadelphia State Senator Anthony Hardy Williams, have said they plan to introduce legislation legalizing needle access programs, and Governor Tom Wolf has signaled his support for needle exchanges. syringes. Supporters hope to ramp up the push for legalization at Wednesday’s rally in Harrisburg, where Ousterman plans to speak. She brings a copy of her son’s medical bill following his hospitalization for endocarditis, totaling $750,000. She also hopes to meet with Bucks County lawmakers to talk about local needle access.

While activists in Pennsylvania are calling for legalization, those in New Jersey – where the exchanges have existed legally for 15 years – warn that such protection is not guaranteed. In Atlantic City, activists spent the summer fighting to keep the beach town’s exchange going after the city council voted to shut it down. Council members argued that the exchange and the addicts it serves are not compatible with the city’s tourist district, and that other communities should open their own exchanges.

But strict regulations on how and where to open a needle exchange in New Jersey can make that impossible. For example, a community must have a certain number of HIV cases related to injection drug use before a site can open.

“It’s a restriction that no other type of health care faces,” said Jenna Mellor, co-director of the New Jersey Harm Reduction Coalition. “The municipality or postcode you live in should not dictate whether you have access to basic health care.”

Legislation has been introduced to relax those rules, allowing the state Department of Health to set up needle exchanges and prohibiting cities from shutting down exchange programs in an effort to prevent another “crisis” like that of Atlantic City, Gov. Phil Murphy said in a news release earlier this year.

The Atlantic City needle exchange has sued to keep its doors open, and a judge has issued a temporary restraining order that will allow it to operate until at least November 12.

“My advice for Pa. is to learn from New Jersey – just because you have a law doesn’t mean you have access to it. We’re still arresting people in New Jersey at a high rate. We are unable to open new needle access programs. We see the one in Atlantic City threatened with closure,” Mellor said. “It’s not just about laws, it’s about how they are implemented.”

2021-10-26
Previous Post: How to Escape Lady Hellbender’s Vault
Next Post: Bungie, once again I beg you for more Destiny 2 Vault space