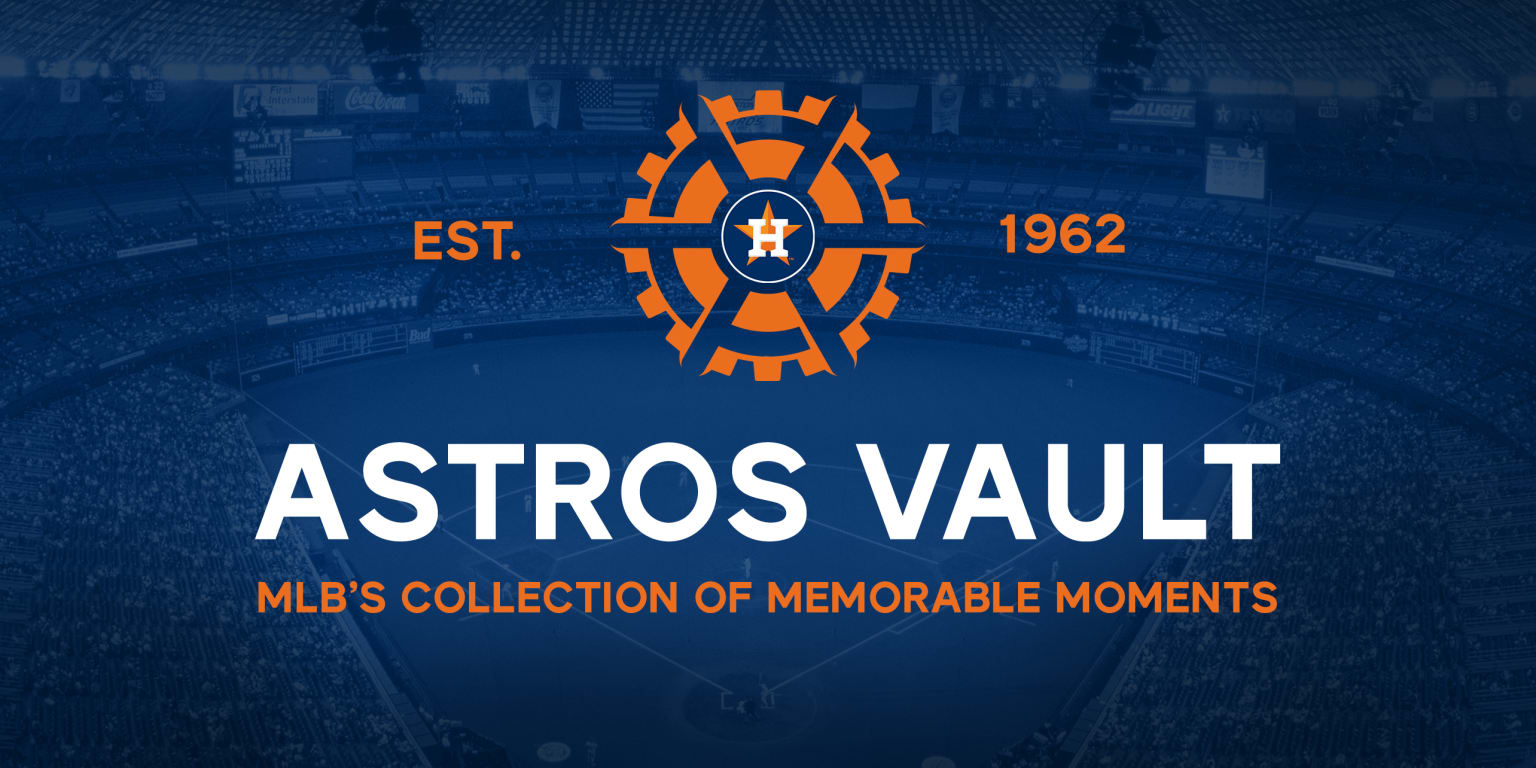 MLB.com is digging through its massive video vault to find classic games you’ve loved, forgotten, or, perhaps, are seeing for the very first time. Watch these moments and many more on the MLB Vault YouTube page.

September 23, 1998: Astros reach 100 wins
The Astros reached 100 wins for the first time in franchise history by defeating the St. Louis Cardinals, 7-1, at Busch Stadium. Craig Biggio and Richard Hidalgo had three hits apiece, and Randy Johnson struck out eight batters while allowing just one run through seven innings. Houston finished with a club-record 102 wins, which was later eclipsed by the Astros of 2018 (103 wins) and 2019 (107 wins).

Oct. 15, 1986: Hatcher’s post-foul feat keeps the marathon going
As the Astros trailed the Mets by a run in the top of the 14th inning of Game 6 of the 1986 National League Championship Series, outfielder Billy Hatcher hit a dramatic home run. He hit a high ball over the left field line that hit the foul post halfway up, sending the crowd of 45,718 fans into a frenzy. Hatcher raced to first base watching the ball sail down the line and over the fence to tie the game – one of the greatest contests in playoff history.

“It was unreal,” Hatcher said. “Thinking back, I was running around the bases, and it was so loud you couldn’t hear yourself thinking. It was so loud. I don’t think my feet are touching the ground. It was a special moment. “

Alas, the Mets rallied to win the game and qualify for the World Series.

June 18, 1967: Don Wilson pitches the first no-hitter at the Astrodome
Wilson was a powerhouse right-handed pitcher who won double-digit games for the Astros for eight straight years (1967-74), including two 16-win seasons. Signed by the Colts .45 in 1964 as an amateur free agent from Compton, Calif., he made his debut at age 21 in 1966. Wilson went 104-92 in 266 career games, including 245 starts for Houston. On June 18, 1967, Wilson threw the first no-hitter pitch in a domed stadium when he struck out 15 batters in a 2–0 win over the Atlanta Braves, sniffing out Hank Aaron for the final. He made history again in 1969 when he followed Cincinnati’s Jim Maloney no-hitter against the Astros at Crosley Field and no-hitter against the Reds the next day, winning 4–0.

October 6, 1981: Ashby homer gives Astros NLDS Game 1 win
After the strike-shortened 1981 season in which the first- and second-half division leaders met in a best-of-five split series, wide receiver Alan Ashby gave the Astros a 1-0 lead. in the series when he hit a two-pointer. home run by Dave Stewart of the Dodgers. “Craig Reynolds had a pinch right in front of me,” Ashby said. “I said, ‘Go back to base, and I’ll drive you.’ He remembers me saying that, and I have no idea why I said it, but I hit Dave Stewart’s home run. It was a nice trot. The Astros won the first two games in Houston before losing three in a row at Dodger Stadium, and the Dodgers won the World Series.

September 14, 1988: Biggio takes Nolan Ryan’s final victory with Astros
Hall of Fame pitcher Nolan Ryan has spent a third of his big league career (nine of 27 seasons) pitching for the Astros, winning 106 games during that span. His last win with the Astros came on September 14, 1988, when he pitched a full game to beat the Reds in Cincinnati. He struck out 13 and allowed four hits in nine innings. His receiver that day? Another future Hall of Famer… Craig Biggio, who started his career behind the plate before moving to second base. In fact, Biggio and Ivan Rodriguez were the only catchers to work with Ryan who ended up in the Hall of Fame. Ryan signed with the Rangers in the offseason and played his final five seasons with Texas.

August 2, 1998: Johnson debuts 12 electric fans at Astros
Randy Johnson, acquired seconds before the Mariners’ July 31 trade deadline, makes his first start in an Astros uniform and records his first of 12 strikeouts of the day, sniffing Pittsburgh’s Manny Martinez swinging to end the first leg in a 6-2 win. Johnson was considered the last piece of a deep Astros team that won 102 games in the regular season, and he went 10-1 with a 1.28 ERA in 11 starts with Houston in the last two months of the season. Johnson was also nearly untouchable in the playoffs, but the Astros’ vaunted offense couldn’t beat the Padres in the NLDS and ended up losing in four games. Johnson signed with the D-backs in the offseason and quickly won four consecutive Cy Youngs.

September 5, 1997: Tony Peña and John Hudek intentionally pretend to walk
In the eighth inning against the San Francisco Giants, receiver Tony Peña and right-hander John Hudek met on the mound and decided they were going to intentionally step on slugger Brian Johnson. Peña stood behind the plate and kept his right hand in the air for Hudek to kick the ball up and out of the area. But as Hudek went into the windup, Peña quickly crouched behind the plate to catch the fastball which landed in the middle of the area. Hudek pulled out a bewildered Johnson to end the run with runners at second and third.

April 15, 1991: Bagwell hits his first career home run
No player in Astros history has scored more points than Jeff Bagwell, who smashed 449 during his 15 seasons in Houston from 1991-2005, but he’ll certainly remember his first. He came off Atlanta reliever Kent Mercker, with Deion Sanders looking good as he went over the fence. Bagwell, who won the National League Rookie of the Year award in 1991, was not known as a power hitter, hitting 15 homers in 1991, 18 in 1992 and 20 in 1993. But after hitting 39 homers in 1994, he spent the next decade as one of the NL’s most dangerous power threats.

October 3, 1999: The Last Astrodome Game
NL Central’s run ended on the last day of the season, and after a strong outing from starting pitcher Mike Hampton, the Astros cruised to a 9-4 victory over the Dodgers, capturing the division title for a third year. consecutive. It wasn’t just any game day; it was the last regular season game ever played in the Astrodome, as the Astros were on schedule to move into their new downtown home in 2000. And what a party it was. Almost every player who wore a Colt .45 or Astros uniform was invited to join the post-game party to say goodbye to the Dome, and a group of the group’s most famous were honored on the field as “All Astrodome team”. “The celebration had some impromptu moments, like Craig Biggio and Mike Hampton on a motorcycle on the pitch as confetti fell from the ceiling. And country music legend Willie Nelson had the last laugh, serenading the crowd with his hit song, “Turn out the Lights (The Party’s Over)” as the final “act” at the Dome.