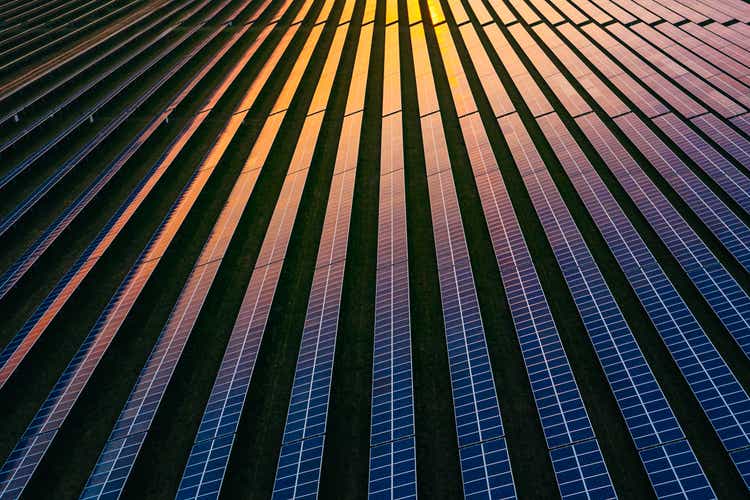 Energy Vault (NYSE: NRGV) is a company that recently entered the public markets through a SPAC merger. The company has an interesting technology that stores energy in heavy blocks that are lifted when the energy is be stored, and lowered again when the energy must be returned to the network. This gravity-based approach to storing energy is similar to pumped storage where water is pumped to a reservoir to be released when energy is needed, but with the added benefit that there is no need a large tank nearby.

We believe this approach holds promise and could indeed be a game-changer for grid-scale energy storage applications. Anyone who finds a suitable solution for storing renewable energy when it is not immediately needed will certainly have a great business opportunity ahead of them.

With the significant addition of renewable energy assets to the grid, particularly wind and solar, it is expected that there will also be a massive need for utility-scale energy storage. The graph below illustrates how this development is likely to unfold in the coming years and the geographies where most of this storage is likely to be needed. We believe that if the energy storage solution is profitable, the numbers below might even underestimate the true size of the opportunity which we believe to be huge.

Also notice in the Cartesian diagram how Energy Vault itself is in the top right corner, which means it’s claimed by the company to be the only solution with both high round-trip efficiency and power nominal at the large-scale network level. If the company is right about that, it should be able to earn much of the projected $270 billion for grid-tied energy storage over the next 10 years.

In our opinion, while round-trip efficiency is an important metric, we believe a few percentage points are not as important as solution scalability and cost per MW/h of storage capacity, as well as the potential rated power scale. With that in mind, we really see pumped storage as the main competitor to Energy Vault’s solution. However, it is important to remember that pumped storage usually requires a tank nearby.

As can be seen in the previous slide, the attributes where Energy Vault is inferior to lithium-ion batteries are round trip efficiency and energy density, however, it is presented as a superior option compared to the rest of the characteristics, and overall, it should have a lower levelized cost of operation, be more scalable, and be more environmentally friendly.

To develop this technology, the company used several advances in AI and computer vision, such as advanced trajectory calculation and materials science for the creation of heavy and durable blocks, using a materials science technology in partnership with Caltech and CEMEX (CX).

These R&D efforts have resulted in 4 patents granted in the United States for the company and 20 patents pending, 18 of which are international. The patents mainly relate to the use of heavy blocks to store energy, the generation of electricity by lowering the blocks, the grabbing/lifting/lowering mechanisms and the damped self-centering mechanism. The strategy followed by the company is to try to protect the visible components and the AI ​​software to keep it as a proprietary trade secret.

The company completed its first commercial-scale system in Switzerland, which validated the core technology. This first system called EV1 connected to the Swiss national grid in July 2020. Since then, the company has made further improvements and now has a new and improved system called EVx, which is highly modular and flexible, and whose weights are made from fully recyclable materials. waste such as fiberglass, soil and ashes. While EV1 achieved 75.3% round-trip efficiency, EVx is expected to reach 80-85%, which is a nice improvement.

By 2025, the company expects the levelized cost of operation to be nearly half that of lithium-ion. If this is indeed the case, we can expect the company to dominate new network-scale storage projects. The slide below summarizes where the company thinks it fits in relation to the most common network attached storage solutions. If the company’s estimates are correct, we think Energy Vault should command a large portion of future networked storage projects.

In addition to its lower cost, the Energy Vault solution has the advantage of not presenting a risk of fire or dangerous gases, and it suffers no significant degradation over time. These should be long-lived operational assets with a considerable lifespan, low carbon footprint and should be able to meet high energy demands both over shorter and longer durations (2-12 hours and more). The solution is expected to be resistant to harsh conditions and high ambient operating temperatures without a material increase in opex. Unlike lithium chemical batteries, high potential energy and composite blocks have no loss of storage capacity over time.

The company plans to combine two business models to enter the market. It plans to offer the systems, with an expected gross margin of 20-30%, and also plans to own some of the systems and lease them to customers targeting a 16% unleveraged rate of return. We appreciate that the company is willing to experiment with what the best go-to-market approach is, and hope that at least one of them will be a resounding success. Personally, we prefer the straightforward approach of selling the systems, and possibly offering maintenance and software contracts to add a recurring revenue component. This would be similar to how wind turbine manufacturers sell turbines, but typically require the customer to sign multi-year maintenance contracts that generate attractive recurring revenue.

The biggest risk we see with an investment in Energy Vault is the fact that so far it has not generated income. He has a pipeline of potential clients, with hundreds of engagements and 8 clients with letters of intent or signed agreements. So there are signs that the company is getting some commercial traction. He expects revenue in 2022, but the ramp-up really isn’t expected until 2024-25. As such, we caution potential investors that this remains a very risky speculative investment, and while the stock price could rise by multiples of the current price if successful, it is also entirely possible that it drops to zero. Society projects a positive adj. EBITDA through 2023 and free cash flow positive through 2024. In our experience, the further out the projections, the less reliable they tend to be.

Energy Vault’s valuation multiples, based on expected EBITDA for 2023 and 2024, are, in our view, quite reasonable. They compare favorably to other tech companies in their industry, such as Enphase (ENPH) and SolarEdge (SEDG). Even with stocks trading above the $10 value when they merged with SPAC.

Of course, these EBITDA projections are based on the assumption that there will be significant demand for the systems from customers, and this is something we cannot be fully confident in until sales are n will not take place. What we will say is that there is a significant risk, but also a significant opportunity if the company were to deliver. We believe that stocks trade at a fair price considering the opportunity but also the risks that exist.

Energy Vault is working on an extraordinarily important problem, and they seem to have found a very good solution. If their systems work as well as the company says they do and they manage to mass-produce them profitably, that could be a game-changer for network-attached storage technology. The shares could rise to a multiple of the current price, but there is also the risk that the company will fail to commercialize the systems, in which case an investment in the company could very well fall to zero. Yet, we firmly believe that this is one of the most exciting renewable energy opportunities available today.