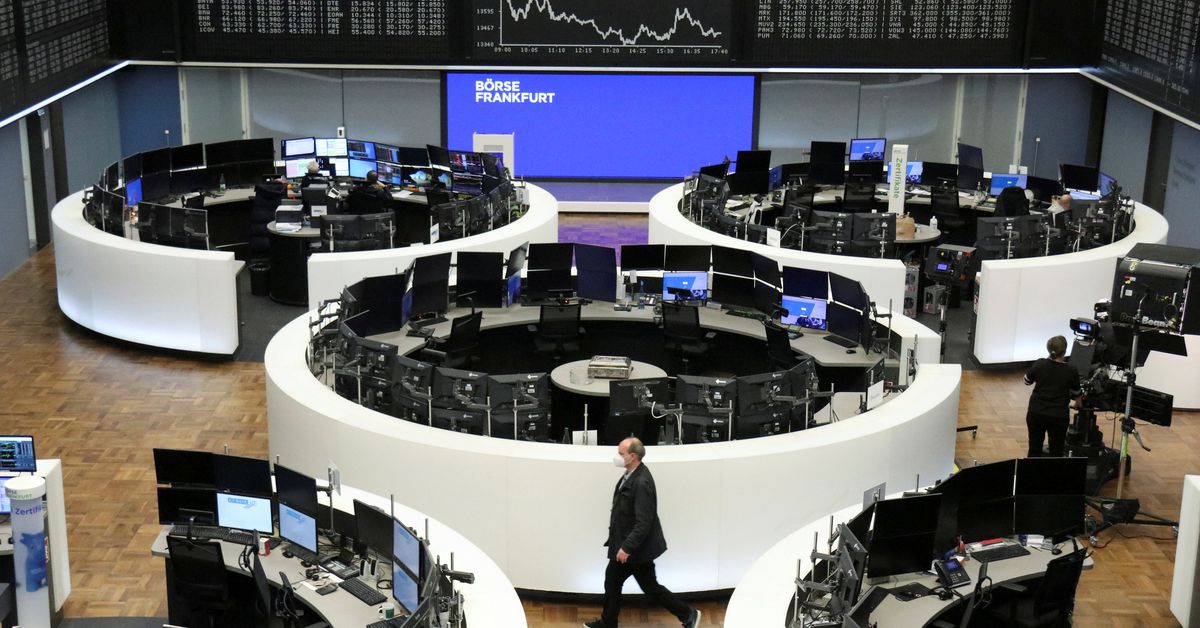 The DAX chart of the German stock price index is pictured on the stock exchange in Frankfurt, Germany, March 10, 2022. REUTERS/Staff

The pan-European STOXX 600 index (.STOXX) firmed 2%, erasing its 1.7% plunge on Thursday, and was expected to post its first weekly gain in four since Russia invaded Ukraine.

Putin said on Friday that there had been progress and “positive changes” in Moscow’s talks with Ukraine, which immediately boosted investor morale. Read more

“While our baseline scenario remains for a ceasefire and reduction in hostile rhetoric between Russia and NATO by the summer, that outcome seems a long way off…the war adds a lack of clarity on commodity prices, global growth and inflation,” said Mark Haefele, chief investment officer at UBS Global Wealth Management.

The European Central Bank cleared the way for an interest rate hike on Thursday as soaring inflation outweighed concerns over the fallout from Russia’s invasion of Ukraine, as US data showed that consumer prices jumped in February to an annual growth rate of 7.9%, the warmest reading in 40 years. Read more

“Central banks now have less flexibility to cushion stock market shocks, as they have managed to do in recent years,” Haefele added.

Goldman Sachs on Thursday lowered its euro zone growth forecast for 2022 to 2.5% from 3.9%, citing risks of a further escalation in the Russia-Ukraine crisis.

Oil stocks (.SXEP) gained 0.6% and were heading for their best week in more than a year as crude prices saw volatile swings following a supply shock from the war in Ukraine and the renewed efforts to bring more supply to market.

Tod’s gained 6.1% as the Italian fashion group expressed optimism for 2022 despite global uncertainty, while shares of infrastructure group Atlantia (ATL.MI) gained 1.1% after the company announced core earnings expectations up 27% by 2024. . Read more