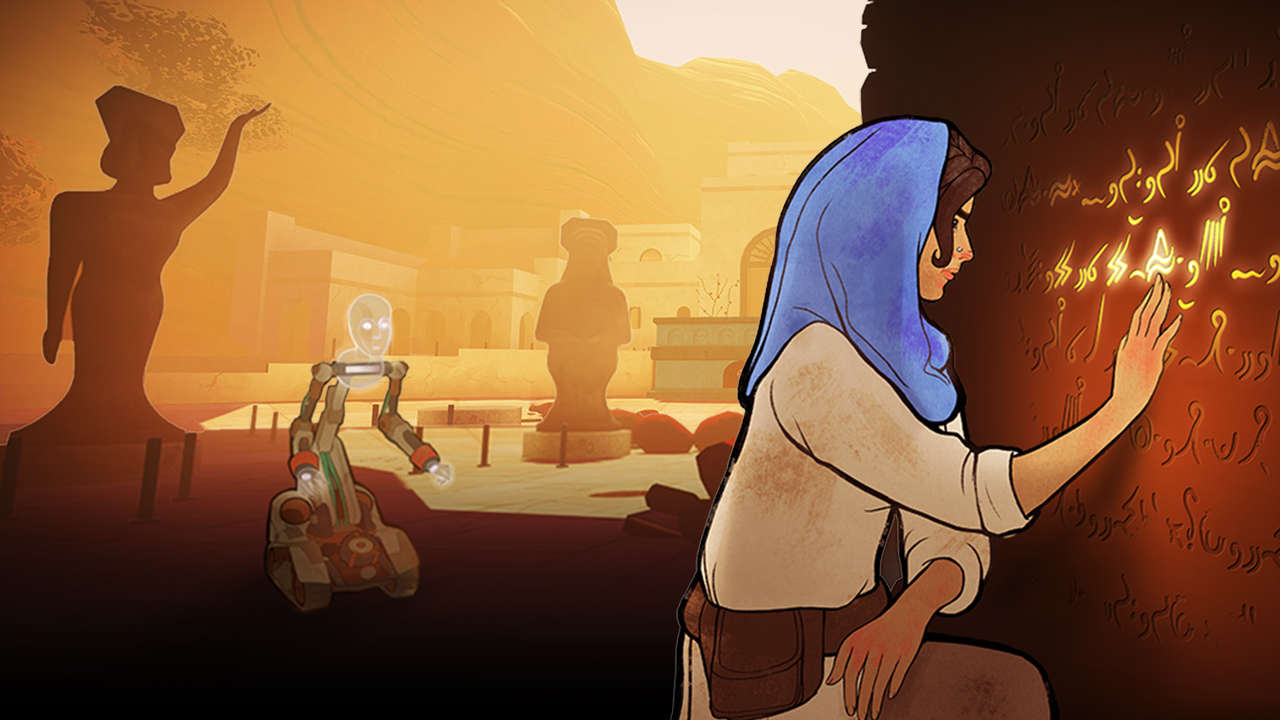 At first glance, Heaven’s Vault sounds like chaos: it’s a planet-surfing sci-fi adventure game in which you play as an archaeologist who finds himself caught up in an apocalyptic prophecy. But it’s a much calmer experience than you might expect – you play as Aliyah, an archaeologist employed by a university on Iox, the richest and most opulent planet in its nebula, to track down Renba, a professor who has disappeared. Along the journey, you’ll learn about the complex and ambitious lore of the world and meet the interesting characters who inhabit it, but not without slowly navigating.

You spend much of the game searching for clues to determine not only Renba’s fate, but also the nature of his research and the discoveries he was making during his travels. For most of the game, the exact details of Renba’s mission are pleasantly hazy, and major theories the player concocts early on may be proven incorrect by later discoveries. To get to the bottom of this, you’ll need to investigate various moons across the nebula, some settled, some abandoned. You’ll also build and maintain friendships or business alliances with people who can provide you with help, collect artifacts and clues, and play around with the game’s neat translation mechanic.

Throughout the game, Aliyah will encounter many passages written in “old” script, which require translation to decipher. It will start out as a guess, but as you progress you will develop a better understanding of what different glyphs in longer words might represent. There is a two-tier system for translating words: if you come across a full sentence listing, you can guess any of the words you are unsure of until you have a full sentence, hopefully consistent. If you find what Aliyah will describe as part of a longer sentence, a list of potential words you have already translated or guessed will appear on the screen, and you must see if the part of the text matches one words that you have already understood or guessed. These partial texts can confirm your definitions – if you have decided that a word means “water” in a previous translation, for example, and it reappears as part of a longer sentence, Aliyah can declare that she is either now confident in the translation of this word or believes it to be wrong. After a while, you’ll build a much larger vocabulary of translated words, making it easier to fill in the gaps.

Over the somewhat excessive runtime of the game, I’ve lost track of the real benefit of all this translation to my progress, as correct translations tend to offer conversational options rather than key clues to know where to go next. But it’s still an interesting and exciting mechanic, as much of the fun of Heaven’s Vault is learning about the lore of the world you find yourself in and the characters that inhabit it. You’re largely oblivious, and while the game builds an exhaustive timeline of events, stretching all the way back to ancient times, it’s mostly up to you to understand the nuances of the sometimes abstract game world.

Heaven’s Vault opens towards its own ending – the very first scene tells you where your adventure will end, which is a curious structural choice for a game so dependent on player choice. It’s meant to indicate, perhaps, that your story will always end the same way, although how you reach that ending differs significantly from player to player.

Seems like a fair claim, too. During my game, I compared notes with another player to make sure our choices mattered, and we discovered that our paths diverged completely in several places. Heaven’s Vault plays out significantly differently depending on how you play it and the choices you make. You can miss entire characters and storylines, or experience wildly different relationships with the game’s small but well-developed cast of recurring characters. The writing is mostly strong throughout, with dialogue flowing naturally and feeling in tune with the decisions you’ve made, and the moment-by-moment plot of Heaven’s Vault truly feels like the culmination of your choices. There are some weird issues with character development – at one point a character asked that I come visit so they could tell me about a major discovery and tell me “some confidences”, only so that they don’t reveal anything during my visit. with them, and a major character stopped trading goods with me for reasons I don’t fully understand, which significantly slowed my progress in the game.

When you easily jump from place to place, make discoveries, and have interesting conversations with Aliyah’s friends and co-workers, not to mention your robot companion, Six-Heaven’s Vault is a joy. It’s perhaps too easy to lose sight of the plot’s backbone, but in the first half in particular, there’s a constant influx of discovery and revelation that gives the game a propulsive hook. But Heaven’s Vault’s reach and ambition win out in the second half. It took me 22 hours to complete the game, and I felt like a lot of that past 12 hours was spent on busy work, especially when it came to the game’s navigation mechanics. .

In one of the weirdest bits of lore, traveling through the nebula requires you to “navigate” the rivers between the moons, steering your ship through literal expanses of water that act as pathways between the moons. locations. They only flow in one direction, so the only meaningful control you have comes when the paths diverge in two directions and you have to choose which way to turn. There’s not much to do on the waters – you can steer left and right, furl your sails to go a little faster, stop to observe all the interesting landmarks you pass, and check your map. Sailing isn’t particularly exciting, but it’s a big part of Heaven’s Vault.

For the first half of the game, sailing feels like a mildly irritating distraction with moments of beauty, taking minutes at a time. But in the back half, the sail mechanics come dangerously close to ruining the whole experience. The sites you need to visit to progress are marked on the map as large areas to explore, and while you can narrow the search areas by finding more artifacts throughout the game, at some point you’ll almost have to definitely find it by browsing these areas yourself. The layout of the river can get infuriating at this point. When traveling to a moon you’ve already visited and miss a turn, you have the option of backtracking to a point just before the turn; however, when looking for an unfamiliar site, such an option does not exist, and one wrong turn can mean a long, slow course correction as you follow one-way rivers back to where you just were , potentially eating up to half an hour.

The game has additional pacing issues throughout – Aliyah moves very slowly, and there was a section of the game where I found myself repeatedly bouncing between the game’s two main locations, Elboreth and Iox, in the game. hoped to trigger new dialog options between characters that would make it easier to find the next site. (Luckily, you can avoid the rigmarole of navigating to those two particular locations by having Six do it for you.)

Heaven’s Vault can be a tedious experience – although patches were applied during the pre-launch period that fixed most major issues, I continued to experience numerous camera issues throughout, and at some point given, a site that took half an hour of browsing to find failed to load when I reached it. When I finally navigated there, it ended up being the least interesting site in the game. While some of these places you seek out are full of plot development, others can feel like a hassle.

There is plenty to be charmed in Heaven’s Vault. The art style is enjoyable and the orchestral soundtrack is often beautiful. The writing and lore can sometimes make the game feel like an adaptation of a book that doesn’t exist, and it’s hard not to invest in learning more about the game’s world. It’s just a shame that there’s also so much boredom to go through and that the experience doesn’t always reach the greatness it sometimes proves capable of. Heaven’s Vault excels at creating a well-constructed branching narrative, but expect long sections of it to feel like a slog.