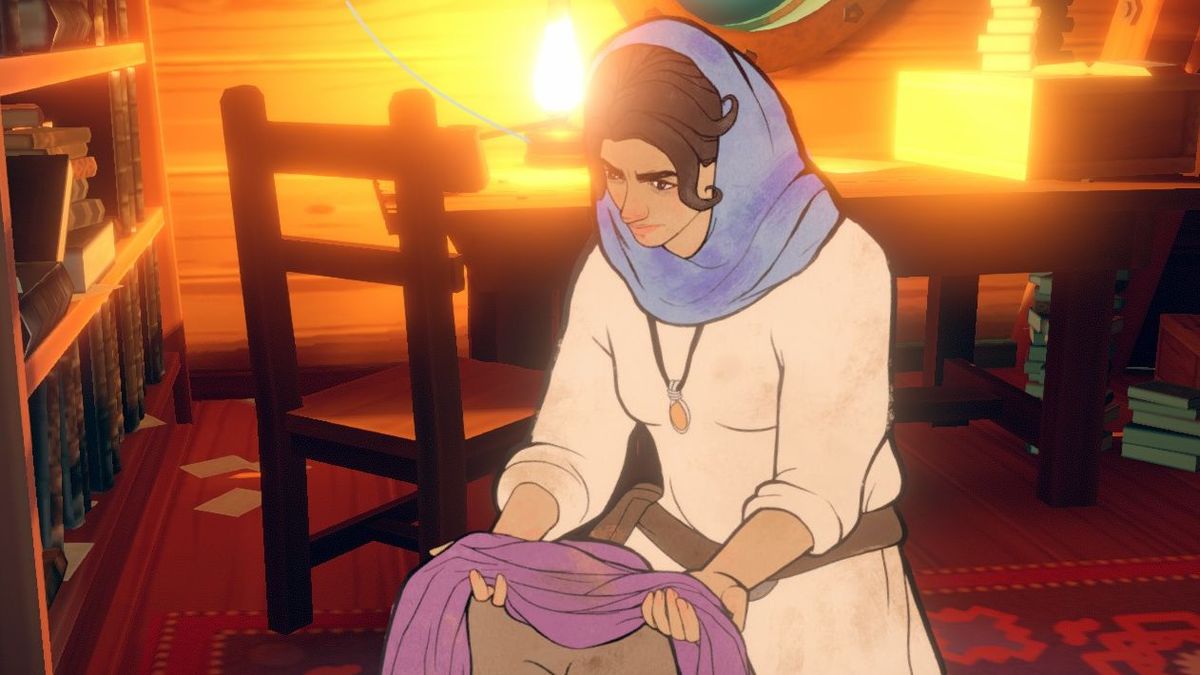 Heaven’s Vault is exquisite. I’ve completed my first part of the Archaeological Sci-Fi Adventure, so major narrative mysteries like “What happened to roboticist Janniqi Renba?” and “What exactly is Heaven’s Vault?” are known. The reason I immediately headed to New Game Plus is that the real puzzle at the heart of Heaven’s Vault is the translation of the world’s ancient hieroglyphs. It’s still ongoing and it’s absolutely beautiful.

As archaeologist Aliya Elasra, I navigated the cosmic rivers of the nebula in my wooden spaceship. I’ve docked on distant moons, wandered farms and markets, and chatted with a diverse cast of characters, including plenty of little chatting with my robot companion, Six. (Don’t ask what happened to One to Five). The mysteries of the story provide a structure to guide your explorations, but for me they have always been secondary to the joy of collecting new fragments of text and discovering new meanings.

Searching for text fragments is done in several ways. There are artefacts with engraved inscriptions – weapons, oil burners, lintels, sculptures… There are fragments of books. There are graffiti. There are murals. Some are obvious from the UI which immediately marks them on screen as areas to interact with. Others only appear if you explore the nooks and crannies of an area.

When you find one, you will see it displayed on the screen as a string of symbols. The raw form is scripta continua – there is no space to separate the words – so part of the puzzle is actually making sense of particular groups of symbols and part is figuring out how to apply those symbols.

To give you an example in English, let’s say you had a text string with no spaces that included the letters: “…TOGETHER…” Part of decoding the meaning is determining whether these should be read as “together” or “to catch her”.

In the beginning, the context clues will be your main guide. If Aaliya describes an artifact as also having the sign of the Empire, the word Emperor or Empress might appear. If the object has an obvious function, such as a place of worship or a weapon, that can also help. You can also just look at the options offered by the game and try to make it the most natural phrase.

If your translation makes sense in multiple contexts, Aliya will turn it from a speculative meaning into a definitive translation in her dictionary. These are very handy because when you’re dealing with unfamiliar words, the game will show you words with similar symbols from your dictionary that might be related.

One of the many things I like about this system is that it works on two levels. On one, you can work your way through the language of the game using approaches like contextual clues, educated guesses, and matching the shapes of words you already know to new fragments until let the game tell you that you have determined where the pauses between the words are. .

For grammar/linguistics/logic buffs (HOLLER!), you can grab your notebook and deduce more nuanced systems. At some point, I took a break from visiting places to look through my dictionary and established that there are markers indicating the past tense, indicating adjectives and verbs, and indicating that two concepts are related l to each other. My most insufferably smug moment was being able to translate fragments that Heaven’s Vault wouldn’t let Aliya decipher in-game yet.

New Game Plus allowed me to start over but keep my existing dictionary. To keep up with my expanded knowledge, the fragments are longer and more involved this time, which is exciting! I also play more like a jerk, so my interactions and choices are a bit different.

Heaven’s Vault isn’t perfect. Sometimes the information added to the game’s historical timeline is a bit out of step with what the character has learned from the conversation. The river is difficult to navigate and sometimes tells you that you have taken a wrong turn despite Six’s instructions. Character reactions don’t always make emotional sense. The camera settles in strange places. Aaliya’s knowledge of Ancient seems too small at first. Walking around the moon of Elboreth is boring. Oh, and sometimes finding artifacts seems very pixel-intensive. To me, none of these are more than minor irritants, but I know others have found them more abrasive.

There is also the animation system. I like it a lot but I know it’s not universal. If you stand still and then start walking again, you will see a ghostly image of Aliya where you left off for a second or two before she disappears. For me, it’s a nod to the archeology theme of the game. Aliya’s presence leaves footprints in the world, maybe a footprint or a scent. They fade quickly, but they’re on the same spectrum as artifacts.

Heaven’s Vault does a magnificent job of allowing you to unlock a language, and therefore a sort of dialogue, with the past, via a wonderfully engaging protagonist.