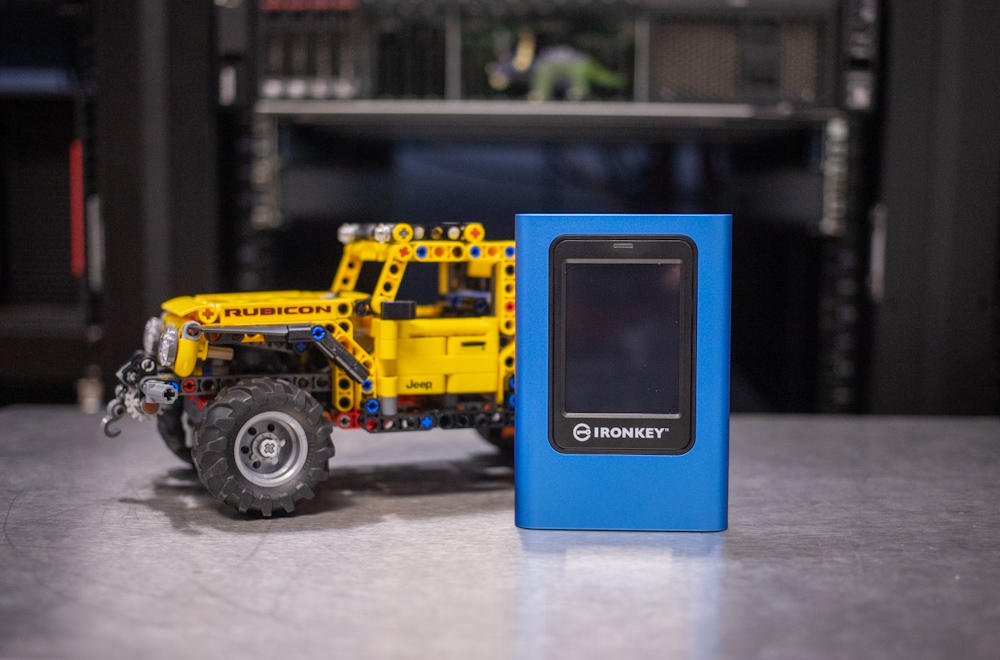 The Ironkey Vault Privacy 80 External SSD is the latest model in Kingston Digital’s line of encrypted devices. The VP80ES is the first OS-independent external SSD featuring a color touchscreen for versatility as well as hardware encryption for data protection. The SSD uses 256-bit XTS-AES encryption protecting against brute-force attacks and BadUSB, and to speed up travel, Kingston has included a neoprene carrying case.

The Ironkey Vault Privacy 80 External SSD is the latest model in Kingston Digital’s line of encrypted devices. The VP80ES is the first OS-independent external SSD featuring a color touchscreen for versatility as well as hardware encryption for data protection. The SSD uses 256-bit XTS-AES encryption protecting against brute-force attacks and BadUSB, and to speed up travel, Kingston has included a neoprene carrying case.

The IronKey Vault Privacy 80 provides a high level of physical encryption for user data. The reader has a touch screen word, phrase or number based authentication system which, once the administrator password is entered, will allow access to all functions of the device. Unfortunately, the VP80ES cannot be used without connecting it to a host device, so all administrative functions must be performed while connected.

We have reviewed many encrypted USB drives and the same thing that many of them share is the use case scenarios of encrypted drives. Many encrypted drives are used in manufacturing, finance, and healthcare environments. Yet Kingston also said Vault Privacy was created for a range of uses, including those mentioned, and for professionals like content creators. 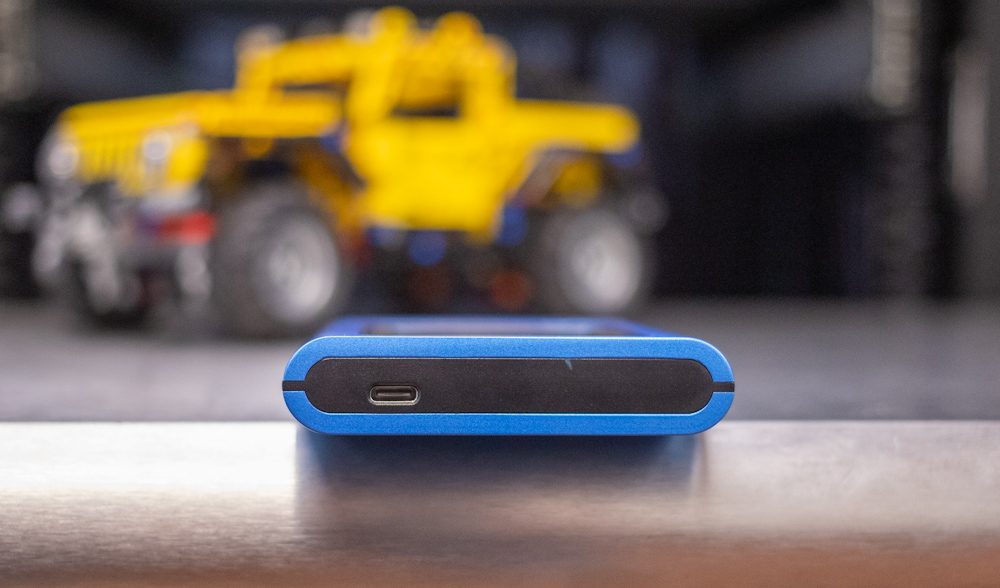 The Vault Privacy 80ES is powered by a Common Criteria EAL5+ certified secure microprocessor. This microprocessor is designed to protect against threats and potential temperaments with features such as always-on hardware encryption and a dedicated encryption engine with 256-bit XTS-AES encryption that provides better security than software alternatives.

The Kingston IronKey Vault Privacy 80 External SSD is available in 480GB, 960GB, and 1920GB capacities and is backed by a three-year limited warranty and free technical support. Readers are not yet widely available, but public pricing seems start around $300 for the 480GB unit.

The construction of the Vault Privacy 80 is quite solid, being aluminum with a hard plastic blue shell. This device can be used in harsh conditions, although care should be taken as the screen of the device should receive a gentle touch.

Due to the aluminum construction, the drive can also dissipate any heat generated by heavy use of the device, as external storage devices are known to get hot under heavy use. The VP80ES does not speak explicitly of an IP index. 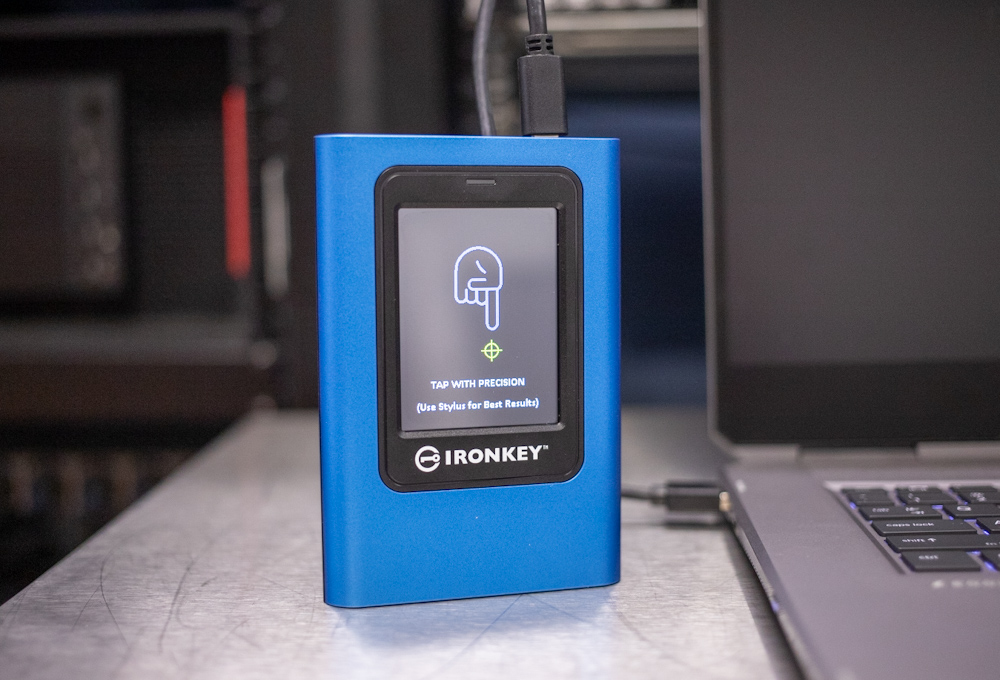 The touch screen allows users to enter the password, which can consist of words or numbers, as well as a host of administration options. Once the password is entered, administrators have seconds to press the settings button to change things like the password, different passwords for each type of user, auto-lock timeout, and even securely erase the device. Overall, the touchscreen was very easy to use and is a solid addition to a secure drive for those who need or want one. 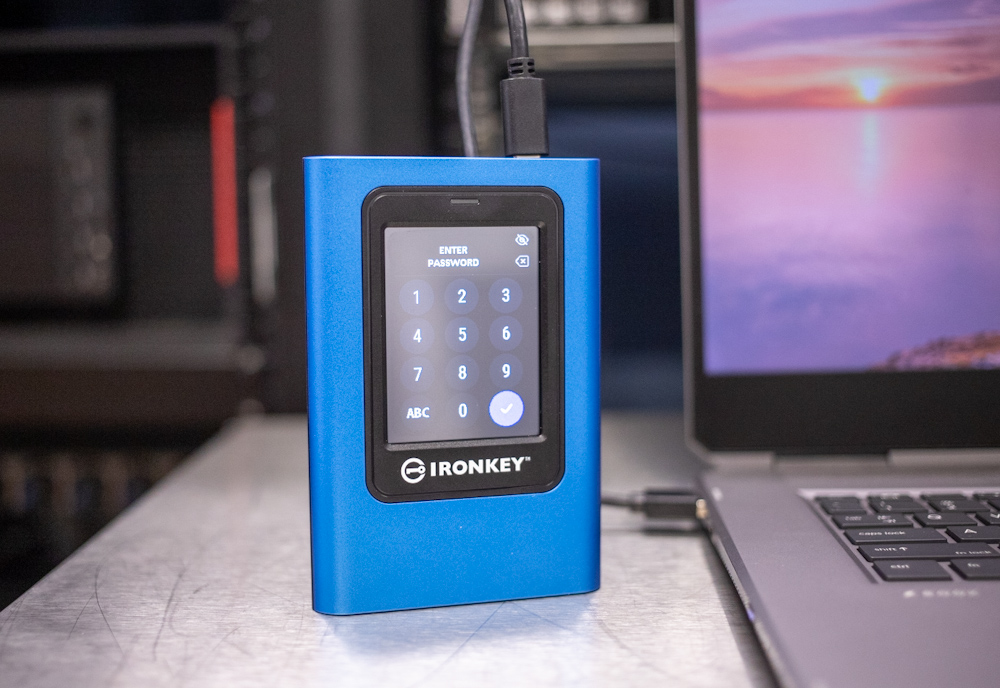 The IronKey Vault Privacy 80 comes with a nifty accessory, a neoprene carrying case with a small cable pocket. A carrying case is always a good idea for small pieces of tech and if dropped in a backpack people won’t have to worry about it bumping into and scratching anything.

The drive comes with FIPS 197 certified XTS-AES 256-bit encryption. This always-on engine is proven to meet rigorous standards and provides better security than less software-based alternatives. With the encryption standard the VP80ES has, it protects even some of the best attempts to crack the admin PIN, however, Kingston has also incorporated a brute force password protection process.

This brute force protection essentially limits password entry attempts to 15 or a different amount set by the administrator. Once the maximum is reached, however, the VP80ES will completely destroy the contents of the disk and will be empty when reconfigured. Having the default value at 15 is a solid amount, however, having the ability to change it to a different number is a nice feature to have.

Using the Vault Privacy 80 is also quite easy to use from the host device side. Kingston Digital has made it so that all users have to do is drag and drop files into the folder created by the VP80ES. This simple feature ensures that no additional software is required to download or use, making everything local to the host device and the VP80ES.

For testing, the first test we ran was the Blackmagic Design drive speed test. The IronKey Vault Privacy 80ES was able to get 238MB/s write and 248MB/s read, pretty close to the 250MB/s speeds reported by Kingston Digital. From the test, we were also able to tick quite a few boxes in the “Will It Work?” section. 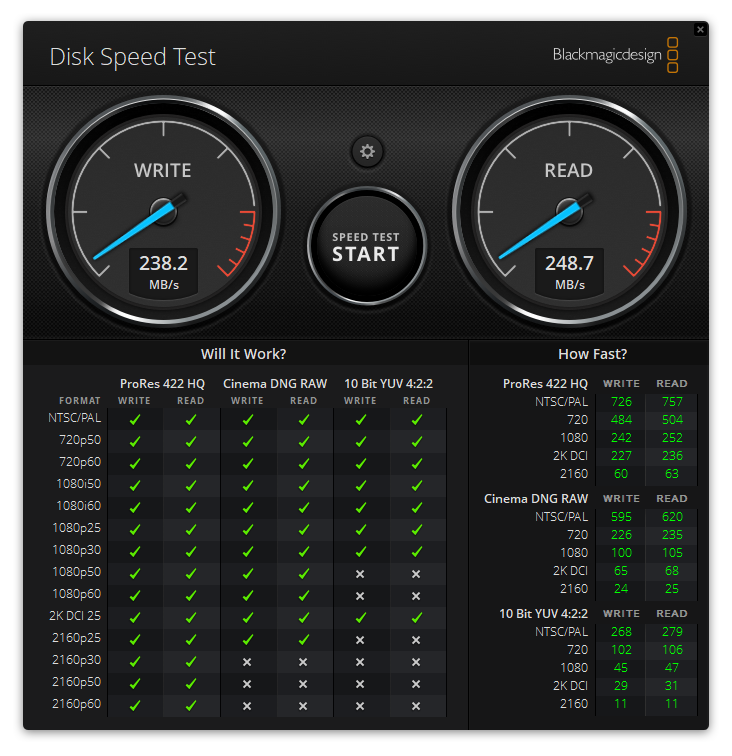 The next test we ran was the IOMeter test, one in a 1-threaded workload and one in a 4-threaded workload. For the first workload, the 1-thread test showed slightly lower numbers than the Blackmagic Design benchmark because the 1-thread is not as intensive as the other tests. In the 2MB sequential test, the VP80ES showed 231MB/s write and 248MB/s, and in the random tests, 230MB/s write and 236MB/s read. Finally, in the 4K test, the VP80ES achieved 5,211 write IOPS and 3,143 read IOPS.

The last test we ran was the IOMeter test, 4 threads, as this puts a heavy load on the device to try and get the maximum performance. This benchmark showed slightly higher numbers than Thread 1. In the 2MB sequential test, the VP80ES showed 233MB/s write and 252MB/s, and in random tests, 232MB/s write and 239 MB/s read. Finally, in the 4K test, the VP80ES achieved 5,219 write IOPS and 3,208 read IOPS.

Overall, the IronKey Vault Privacy 80 is one of the more unique encrypted storage devices we’ve reviewed. It comes with a strong encryption engine with FIPS 197 and XTS-AES 256-bit encryption, as well as a Common Criteria EAL5+ certified secure microprocessor. The Vault Privacy 80ES offers a solid defense against some of the most brutal attacks. 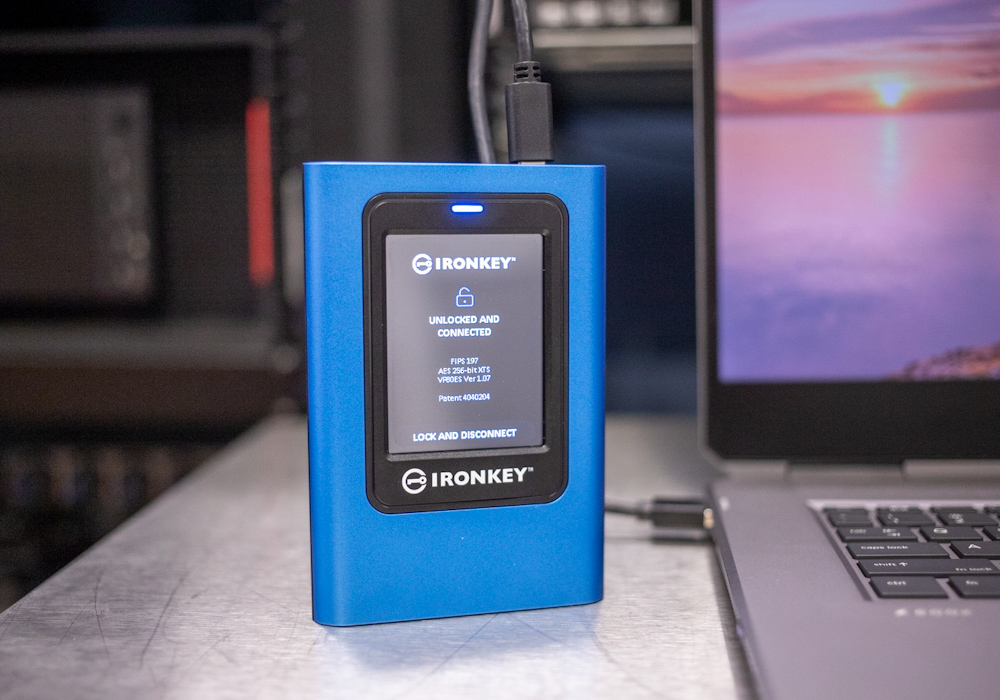 In terms of performance, the VP80ES won’t win the fastest drive award, however, speed isn’t all this device offers. The performance we got from the VP80ES was fairly close to the reported benchmarks Kingston Digital cites, even surpassing 250MB/s in the 2MB sequential read by a tiny margin. In the Blackmagic Design test, we also saw that it was able to tick quite a few boxes in the “Will It Work?” section, so rest assured that the VP80ES supports a variety of video files.

The strength and security features of IronKey Vault Privacy come at a cost. The 960GB version we reviewed is currently $365, with the smaller one costing less than $300. These are, however, brand new discs and not widely available at retail, so prices can be volatile. While those prices seem high, IronKey has a reputation for strong security on all of its encrypted drives and devices, and the large touchscreen makes it one of the easiest secure SSDs to use.