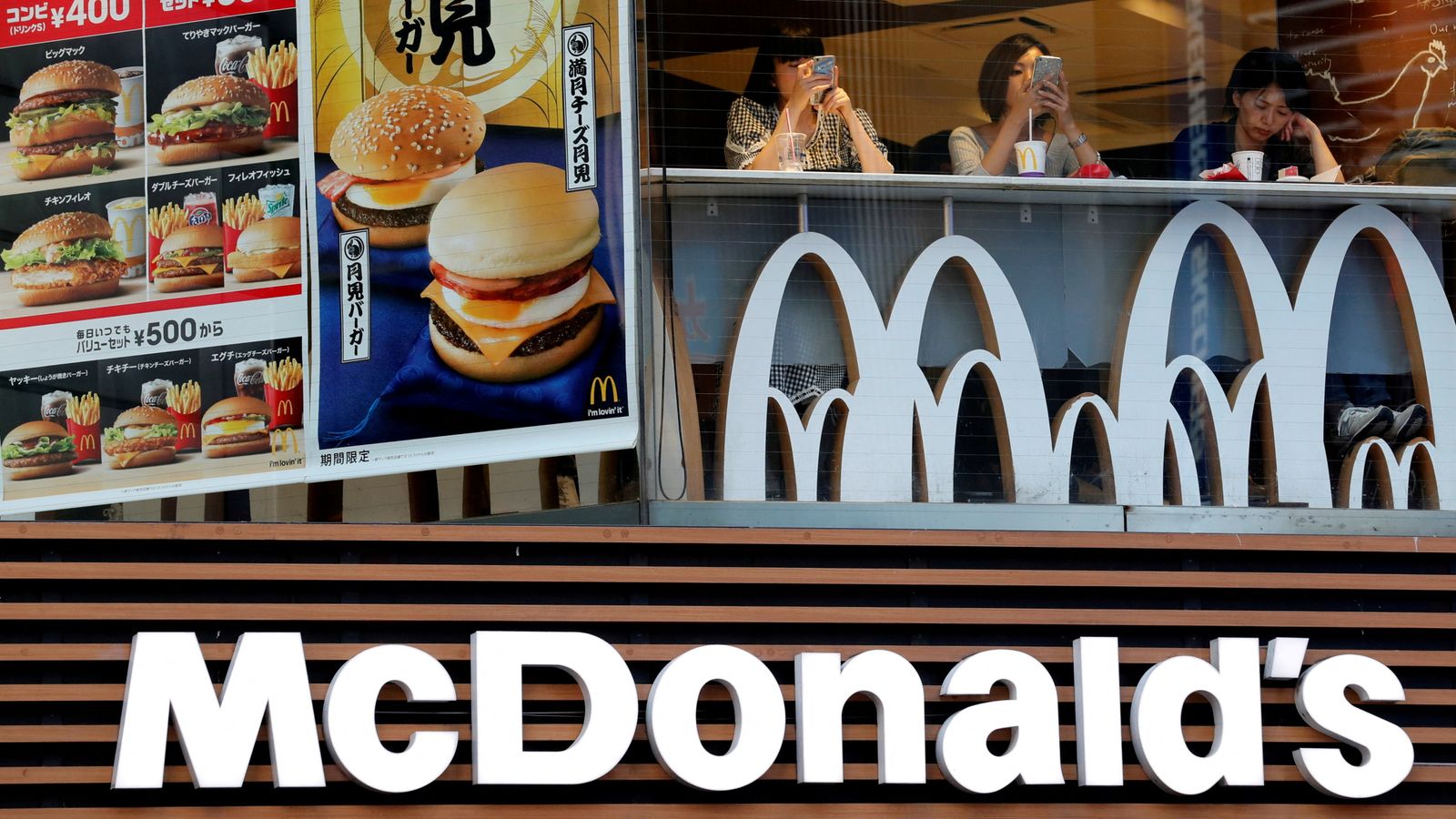 Ukraine Invasion: Attention Turns to McDonald’s and Crypto Exchanges, But Hasn’t Taken a Stand Against Russia Yet | Economic news

As the West has unleashed severe financial sanctions and companies have abandoned operations in Russia, attention is now turning to companies that have yet to take a stand.

While many corporate American strongholds, including Nike, Apple, ExxonMobil and Harley-Davidson, have withdrawn from Russia, some of the most famous companies are still in the country, for now.

Overnight, the head of the New York State pension fund pointed the finger at McDonald’s and Pepsi.

Thomas DiNapoli, who is the comptroller of the $110.8 billion New York State Joint Retirement Fund, told Reuters that companies “need to consider whether doing business in Russia is worth the risk during this time. extraordinarily volatile”.

He added: “Russia’s unprovoked invasion of Ukraine and its highly unpredictable foreign policy are a threat to the global economy.

“We encourage the companies we invest in to do a risk analysis and determine what is in the best interests of their business and their shareholders.”

The first western brand manufactured and sold in Russia

McDonald’s and Pepsi were among the first Western companies to enter the former Soviet Union.

Pepsi was the first western brand manufactured and sold in the state. In 1959, its head of international operations, Donald Kendall, who later became the general manager, presented Nikita Khrushchev, then a former Soviet premier, with a Pepsi at the American National Exhibition in Moscow.

Just over 14 years later, the drink made its way to the Soviet Union, several years before rival Coca-Cola.

McDonald’s, meanwhile, received permission from the Communist Party in 1988 to open in the state, and in late January 1990 its first outlet opened in Moscow’s Pushkinskaya Square. Some 5,000 people queued for up to six hours to enter what was the country’s first fast food establishment.

No intention to ban Russians

Depriving the Russians of their hamburgers and their cola is one thing. But another, arguably more serious omission so far from the list of bodies imposing sanctions on Russia concerns the cryptocurrency space.

Cryptocurrency exchanges Coinbase and Binance have repeatedly made it clear – and have done so again today – that they have no intention of banning Russians from their platforms.

It has raised fears that some Russians, particularly those who have been individually subject to asset freeze orders by the US, EU and UK, are using it to circumvent financial sanctions.

The US Treasury has told exchanges not to facilitate transactions from individuals or organizations that have been sanctioned while Bruno Le Maire, the French finance minister, has said the bloc could impose restrictions to ensure this remains the case. . Christine Lagarde, President of the European Central Bank, is also said to have lobbied in this direction.

And Mykhailo Fedorov, Deputy Prime Minister of Ukraine, tweeted on Wednesday: “I call on all major crypto exchanges to block Russian user addresses.

“It is crucial not only to freeze addresses linked to Russian and Belarusian politicians, but also to sabotage ordinary users.”

Today, however, Brian Armstrong, co-founder and chief executive of Coinbase, insisted he was not undermining the sanctions and stressed that the company would follow the law.

In a series of tweets, he said, “We don’t think there is a high risk of Russian oligarchs using crypto to avoid sanctions. Because this is an open ledger, try Smuggling a lot of money through crypto would be more traceable than using US dollars, cash, art, gold, or other assets.

“Furthermore, we are not preemptively prohibiting all Russians from using Coinbase. We believe that everyone deserves access to basic financial services, unless otherwise provided by law.

“Some ordinary Russians are using crypto as a lifeline now that their currency has crashed. Many of them are probably against what their country is doing, and a ban would hurt them too. That said, if the US government decides to impose a ban, we will of course follow these laws.

“Sanctions are a complex issue, and the situation is changing rapidly, so we will continue to work with law enforcement and governments, and take more action if necessary. We will also of course continue to work to activate the services of cryptography for people in Ukraine who need help.”

Binance agrees. He told CNBC: “We are not going to unilaterally freeze the accounts of millions of innocent users.

“Unilaterally deciding to deny people access to their crypto would defeat the very reason crypto exists.”

What is not disputed is that, in the days following the announcement of the ban on Russian banks from accessing SWIFT, the interbank communication system that facilitates cross-border payments, transaction volumes of cryptocurrency have swelled.

The price of Bitcoin is up just under 7% this week, although Ethereum and Dogecoin, having surged on Monday and Tuesday, are more or less unchanged over the week.

Proponents of crypto exchanges argue that even if they banned Russians from accessing their platforms, it wouldn’t make any difference because there are many other exchanges they could use to trade the currencies.

It also seems unlikely that, as Mr. Armstrong claims, crypto would be of significant help to oligarchs whose assets have been frozen, as those transactions would be more easily tracked.

And there is another crucial factor – the relatively shallow depth of the crypto markets. Cryptocurrency trading volumes, even at the high levels seen earlier this week, are only a few billion dollars. That may seem like a lot of money, but it’s tiny compared to the nearly $7 billion that changes hands daily in the forex markets.

It is also relatively small compared to the sums that the oligarchs and sanctioned entities would try to move. An oligarch trying to move, say, $5 billion across the crypto markets would appear very quickly.

The current crisis, however, seems to be an important moment in the history of cryptocurrency and perhaps the moment when the asset becomes subject to heavier regulation than it has to date.