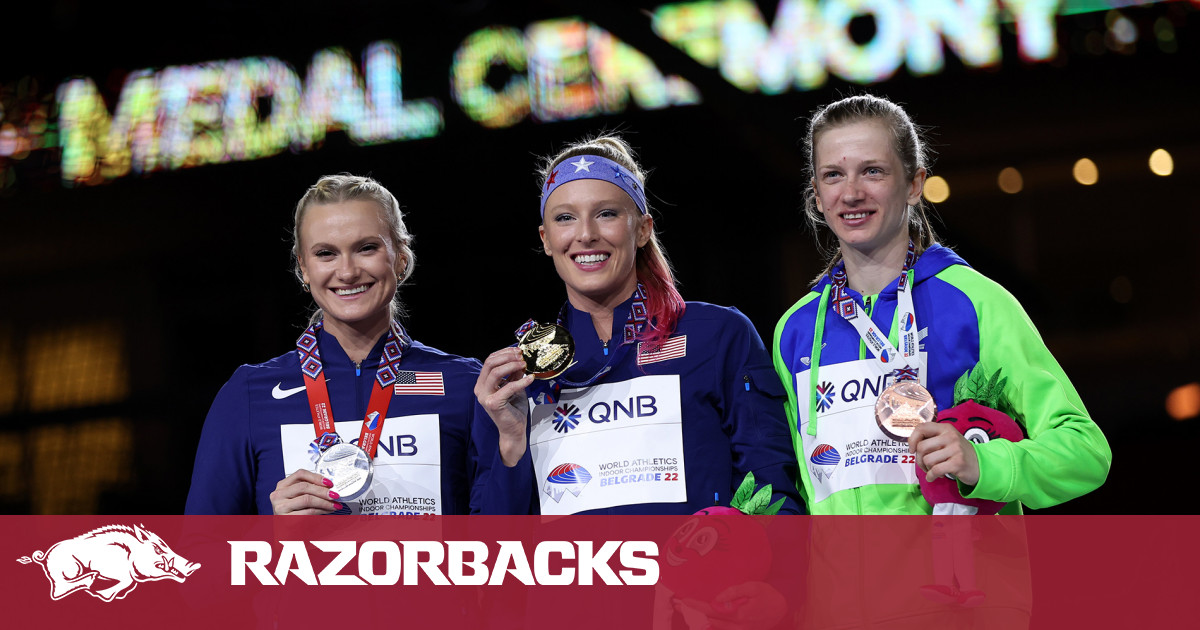 World Indoor: Gold for Morris, Bronze for Sutej in the pole vault

Belgrade, Serbia –Three medals were collected by athletes with ties to the Arkansas Razorbacks program among the five who competed in the final of the World Indoor Championships in Athletics on Saturday at Stark Arena.

“It’s really amazing,” said Morris, the 2018 world indoor champion. “To be at this level for so many years is so hard to do. My goal today was to focus on one jump at a time, one bar at a time, brick by brick.

“To be able to win this title, it really means a lot to me. After a year like last year where I was injured for the Olympics, you feel like you have to prove yourself. We are so hard on ourselves and I wanted to go out and prove to myself that I could still do it at this level.

Sutej cleared 15-7 for bronze after going over 15-5 (4.70) on his third attempt. Sutej had erased 15-9 a few weeks ago to improve on his Slovenian national record. Last season, Sutej was a silver medalist at the European Indoor and finished fifth at the Tokyo Olympics.

“It was great to improve a lot technically, although nothing changed drastically in my preparation,” said Sutej, who was one of the crowd favourites. “We just continued on the path we started a few years ago.

“The most important thing is that I have become much stronger mentally and much more competitive at world level. I am no longer the youngest athlete in our field. I already have three Olympics and European championship numbers and the world on my performance list, but I still don’t have that many medals in my collections.

“I had a lot of motivation for tonight and this achievement will motivate me to continue at the highest level, even until 2024. Now I aim to prepare for the Worlds and the Summer Europeans and I hope that my form will be even better than now.”

“Today was about battling my own internal demons,” Morris noted. “To do it back to back, four years apart, was amazing and to do it with my teammate and now training partner Katie was really special. It gives me goosebumps to think about it. We’re going to go back and forth over the next few years. It’s going to be so much fun.

“I was disappointed not to have 4.90m in me today. I went there, but my energy was gone after knowing that I had won.

Competing in his first World Indoor Championships, Crouser quickly improved the meet record on his first attempt. He shot to a distance of 73-7.5 (22.44) to surpass the mark of 73-2.5 (22.31) set by two-time defending champion Tomas Walsh of New Zealand.

In the third round, however, Crouser’s mark was overtaken by a 73-11 (22.53) putt from Brazilian Darian Romani, who moved up to fourth on the all-time world indoor list.

Romani finished with the 2022 world best indoor mark to win gold while Crouser finished second and in third place was Walsh, who equaled his winning mark from 2018.

Competing in a three-race gauntlet on the same day, Mota set two career-best times to reach the final.

Running at 9 a.m. in Serbia, Mota posted an 8.05 to place fourth in the third of six first-round runs. Qualifying for the semi-final included the top three in each heat with the next six best times.

Mota’s 8.05 ranked 11and overall and bettered his Venezuelan national record of 8.12 set earlier this indoor season. It also moved her to an equal No. 4 on UA’s all-time list, matching Taliyah Brooks’ time.

The semi-final followed at 6:15 p.m. and Mota improved further, clocking 7.99 to place third in the second of three runs and claim one of only two qualifying times for the final.

Along with lowering his national record, Mota moved to a tie at No. 3 on UA’s all-time list with current teammate Daszay Freeman. Her 7.99, which is No. 2 all-time among South American hurdles, ranked seventh among 24 in the semifinals.

Mota was stationed in lane 1 for the final, which took place at 9:08 p.m., and she finished fifth with another time of 8.05.

Cyrena Samba-Mayela of France won the race with a national best of 7.78. Devynne Charlton of the Bahamas was second in a national record 7.81 while Gabby Cunningham of the US, was third in 7.87.

Also stationed in Lane 1 for the 400m final, the former Razorback, Washington, was sixth with a time of 46.85. Jereem Richards of Trinidad and Tobago won the race with a championship record of 45.00 ahead of 45.05 for American Trevor Bassitt and 45.33 for Sweden’s Carl Bengtstrom.

2022-03-19
Previous Post: All Tunic Fairy locations in the Eastern Vault
Next Post: Duplantis extends his own pole vault world record in Belgrade